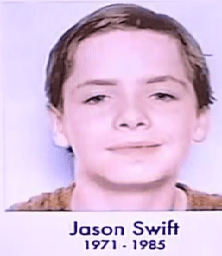 Sidney Cooke , born 18.4.1927, nicknamed Hissing Sid, was imprisoned for the manslaughter of Jason Swift and received a 19 years sentence in May 1989. On 30th November 1985 Jason Swift’s body was discovered by a farm worker in Stapleford Tawney, Essex. It was thought that Jason was probably killed on 14th November 1985 and asphyxia was the cause of death, probably as a result of suffocation. Jason’s family home was in Hackney, but it is said by a former Islington residential worker that Jason was in Conewood Street children’s home not long before he was killed and ISN survivors remember him well. In the 90s Eileen Fairweather, journalist,  heard from two separate sources about Jason being in Conewood Street but wrote that because of missing files Islington Council could not confirm this. Her article is HERE.

A timeline of the investigation, named Operation Stranger and Operation Orchid is available HERE.

There are some TV programmes on youtube about Sidney Cooke

The Wolf Pack is   HERE